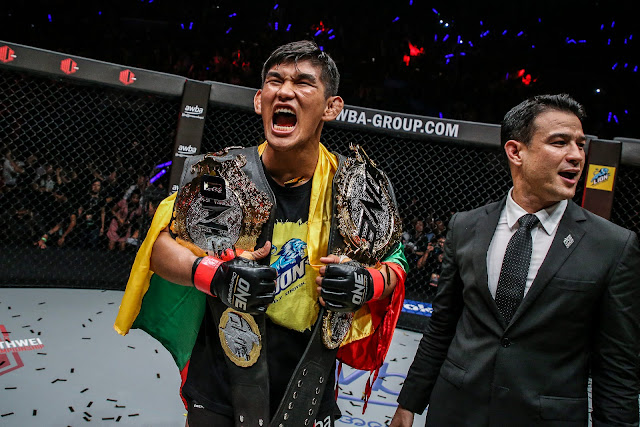 PRESS RELEASE
23 May 2018 – Yangon, Myanmar: The largest global sports media property in Asian history, ONE Championship™ (ONE), has just announced the main event for the upcoming card, ONE: SPIRIT OF A WARRIOR, which is set for 29 June at the Thuwunna Indoor Stadium in Yangon, Myanmar. Reigning ONE Middleweight and Light Heavyweight World Champion “The Burmese Python” Aung La N Sang of Myanmar will defend his middleweight title against Ken Hasegawa of Japan.
Ticket information for ONE: SPIRIT OF A WARRIOR is available at www.onefc.com.
Chatri Sityodtong, Chairman and CEO of ONE Championship, stated: “Whenever Aung La N Sang steps foot on Myanmar soil, he is greeted by throngs of screaming fans. He truly is Myanmar’s biggest star, and is a great representative of the country’s strength and resolve. Our ONE Middleweight and Light Heavyweight World Champion is ready to face a tough new opponent in Japan’s Ken Hasegawa, and I am super excited for another action-packed evening in Yangon. ONE: SPIRIT OF A WARRIOR is shaping up to be one of the biggest nights in Myanmar’s martial arts history, and fans will not want to miss what goes down at the Thuwunna Indoor Stadium.”
33-year-old Aung La N Sang is Myanmar’s most successful athlete in history, whose impressive submission skills have earned him the moniker of ”The Burmese Python”. Born in Myitkyina in the mountainous Kachin State, he belongs to an ethnic minority known as the Kachin. Aung La N Sang captured the ONE Middleweight World Championship with a unanimous decision victory over Vitaly Bigdash in June of 2017. In his most recent bout, he defeated Brazil’s Alexandre Machado to be crowned the new ONE Light Heavyweight World Champion. Next up, Aung La N Sang will defend his middleweight title against Ken Hasegawa.
31-year-old Ken Hasegawa of Kanagawa, Japan is a martial arts veteran set to make his ONE Championship debut. The middleweight contender has finished three of his last five opponents, showcasing the undeniable submission skills and thunderous knockout power that he has become known for competing in Japanese martial arts promotions Deep and Rizin. With a professional record of 16-2-1, which includes four submissions and six scintillating knockouts, Hasegawa will step into the ONE Championship cage for the first time at ONE: SPIRIT OF A WARRIOR. He is set to challenge Aung La N Sang for the ONE Middleweight World Championship.
Aung La N Sang, ONE Middleweight and Light Heavyweight World Champion, stated: “It is always a pleasure and a privilege to share my skills and talents to everyone back home. As champion, I am willing to take on all comers. It is an honor to represent the country of Myanmar on the biggest global stage of martial arts competition. This world championship means a lot to me, to those who have been behind my career from the very beginning, to my family, and to my friends. I will do everything in my power to defend this title against the hungry lion that is Ken Hasegawa.”
Ken Hasegawa, ONE World Title Challenger, stated: “After eight years of excellence as a professional, I have reached the next stage in my career, and I can’t be any more excited for what is in store for me. I am grateful to ONE Championship for giving me the opportunity to showcase my talents to the world. It is an honor to face Aung La N Sang for the belt. I respect him and what he has accomplished, but I am confident of victory, and my hand will be raised as the new middleweight champion.”
For more updates on ONE Championship, please visit www.onefc.com, follow us on Twitter and Instagram @ONEChampionship, and like us on Facebook at https://www.facebook.com/ONEChampionship.