Benjamin Bennett to compete at ‘Brave 12: KHK Legacy’ in Indonesia

A Majestic Future For The ‘King of Birds’ 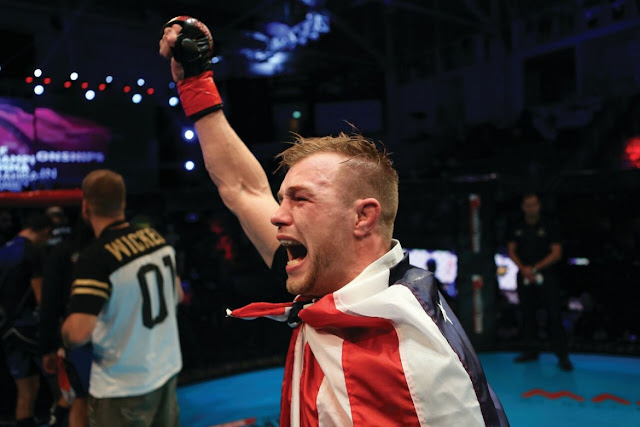 Benjamin Bennett
PRESS RELEASE
In 2017, Benjamin Bennett won the gold medal at the welterweight division of the International Mixed Martial Arts Federation (IMMAF) World Championships in Manama, Bahrain. Recently, the American MMA fighter fighting out of Saint Louis, Missouri signed a contract with Bahrain-based MMA promotion Brave Combat Federation.
Bennett picked up five victories in the 2017 IMMAF World Championships. The American athlete, who has also found success in amateur boxing, started strong in the tournament in Bahrain with a unanimous decision victory over Team Bahrain boxing specialist Abbas Khan followed by a knockout win over Pat Hamer.
In the quarter final of the 2017 IMMAF World Championships, Bennett defeated Oskar Karlstrom Biller via unanimous decision. Bennett went on to defeat Issa Isakov via unanimous decision in the semifinal and Sola Axel via split decision in the finals.
The Kingdom of Bahrain will be hosting the 2018 and 2019 IMMAF World Championships. It will be a part of the Brave International Combat Week.
Including the five victories at the 2017 IMMAF World Championships in Bahrain, Bennett currently has 16 wins and 4 losses. The four opponents he lost to were Raymond Gray, Manny Villareal, William Starks and Alex Martinez.
Before Bennett, Brave CF has signed several IMMAF medalists including the Frans Mlambo, Hardeep Rai, Hussain Ayyad and Abdul Hussien. On May 11, 2018, Bennett will compete in the 12th event of the Bahrain-based MMA promotion.
“Brave 12: KHK Legacy” will take place in Jakarta, Indonesia. Bennett’s opponent has yet to be announced.
Ayyad will also compete at “Brave 12: KHK Legacy” in the flyweight division. His opponent will be Jomar Pa-ac of the Philippines.
Moreover, Pawel Kielek will compete against Mehdi Baghdad at “Brave 12: KHK Legacy.” Eldar Eldarov will face Brian Hooi in the lightweight division.
Watch the bout between Bennett and Khan at the 2017 IMMAF World Championships here:
- Advertisement (300x250) -