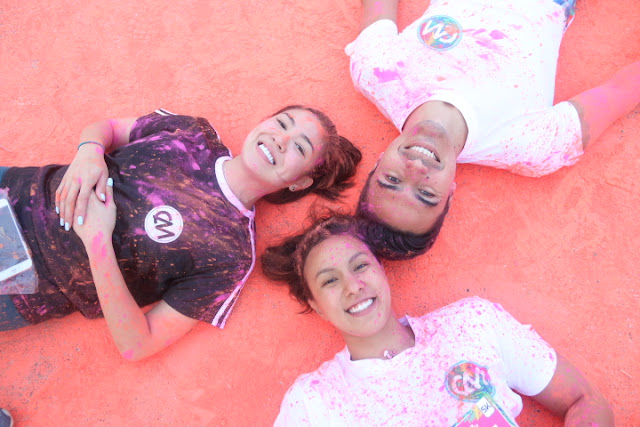 Zara Carbonell, Evan Spargo, Jasmine Alkhaldi
PRESS RELEASE
09 April 2018 – MANILA – ColorManila, the number one fun run organizer in the Philippines, just had two successful events last weekend, with its CM Paradise Run Laguna, which had Honda Motors as its major sponsor, and CM Glitter Run in Dagupan City,  which was co-presented by CSI Malls.  Both events, which were packed and sold out, were held simultaneously, with both Laguna and Dagupan City, experiencing the CM Paradise Run and CM Glitter Run franchises of ColorManila.Beauty queen Zara Carbonell, Philippine National Swimming Team’s Jasmine Alkhaldi and Philippine Volcanoes’ Evan Spargo, were also seen enjoying the event, at the CM Paradise Run – Laguna leg, held at Greenfield, Santa Rosa. ColorManila VP Justine Cordero says, “We are delighted to have had a successful weekend, marked by these two events, CM Glitter Run in Dagupan City, and CM Paradise Run, held in Laguna.  Our followers can look forward to at least 20 more events for the year, which will be held in different parts of the country.  Our only goal is to keep our runners happy and for them to enjoy the events that we work hard for.”ColorManila’s next CM Paradise Run events will be held in Iloilo on May 20, and Cebu, on June 17, 2018.For more information, visit www.colormanila.com and FB/ColorManila.