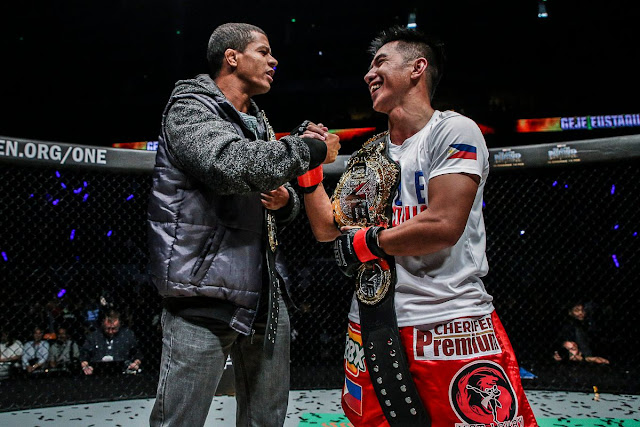 Adriano Moraes, Geje Eustaquio
If based on the old idiom “Second time’s the charm,” it would be​ the perfect ​embodiment to depict Filipino superstar Geje Eustaquio’s professional mixed martial arts career as Lady Luck seems to be on his side in every rematch that he has had.
Out of 16 bouts in his seven-year prizefighting stint, Eustaquio has shared the stage with the same foe on two occasions, walking out in both instances with his arm raised in triumph.
After dropping a split decision to Anatpong Bunrad in April 2015, Eustaquio settled the score with his arch-nemesis two years later by edging out the Thai hard-hitter with his own split decision victory.
Meanwhile, Eustaquio clinched the ONE Interim Flyweight World Championship, toppling Kazakh rival Kairat Akhmetov by way of five-round unanimous decision in a second encounter this past January.
“Winning the world title is a dream come true for me. Ever since I started my professional career, the goal was to be a world champion. Now, that goal is a reality,” Eustaquio stated.
Believing that it could be sweeter the second time around, the 29-year-old Baguio City native seeks to replicate the same magic as he is slated to lock horns once again with Brazilian flyweight kingpin Adriano Moraes.
Both men are scheduled to face each other in a world title unification clash at ONE: PINNACLE OF POWER, which takes place at the Studio City Event Center in Macau, China on June 23.
“There were lots of trials and challenges. My path was not the easiest, but I always knew what I had to do to achieve it. Like I always say, it’s either you win or you learn. I learned from my past failures. And here I am today. That’s the secret to my success,” Eustaquio shared.
“On June 23, I have a tough task in front of me. However, it is still an opportunity for me, an opportunity that comes once in a lifetime. On that date, it’s my opportunity to become the undisputed champion of this division. And I am coming for it,” he added.
Eustaquio and Moraes stood opposite each other for the first time in September 2014 when the two collided for the inaugural ONE Flyweight World Championship.
Moraes derailed Eustaquio’s championship aspirations as he found a way to counteract his opponent’s striking prowess in the second round and then forced the 5-foot-5 Team Lakay representative to wave the white flag with a guillotine choke.
Eustaquio admitted that it was a tough defeat to digest, but he pointed out that he took a lot away from it by viewing it as a learning curve.
“That loss has taught me a lot. Ever since then, I have worked extensively in improving in all areas,” he said. “I have worked extremely hard to get to this point because deep inside, I knew we would meet again. Now I can finally give him a better fight.”
Since his initial meeting with Moraes almost four years ago, Eustaquio stressed that he has grown tremendously as he has matured and expanded his skillset.
“I have evolved as a martial artist since we first met inside the cage in 2014. I know that it will be different in the rematch against Adriano Moraes. The second bout against Kairat Akhmetov is a testament that I am no longer a one-dimensional fighter. I trusted my team, and in the bout against Akhmetov, one of the things we worked on was how to bring the bout back to the feet,” he explained.
In his upcoming rematch, Eustaquio expects that the Brazilian submission specialist may look to focus on using his other skills.
“This time around, I have a feeling we will be standing more. I think he will want to stand and trade with me to test his striking,” he reasoned. “If the going gets rough, then he can focus on taking it to the mat. The same principle applies to me. I want to test my Jiu-Jitsu skills too, and what better opponent than Adriano Moraes to do so against?”
According to Eustaquio, defeating Moraes to become the undisputed ONE Flyweight World Champion would be the proudest moment of his career.
“This rematch is very big. It is the biggest of my career, no doubt. I am treating this bout as the most significant of my time as a professional mixed martial artist, but because of my hard work and preparations, all that is left is to give the performance of a lifetime,” he ended.
For more updates on ONE Championship, please visit www.onefc.com, follow us on Twitter and Instagram @ONEChampionship, and like us on Facebook at https://www.facebook.com/ONEChampionship.