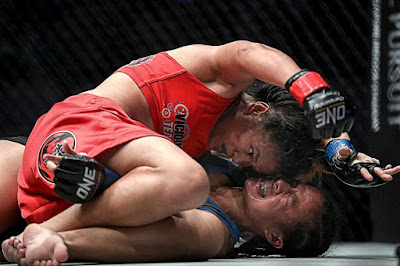 Gina Iniong, Priscilla Lumban Gaol
Mixed martial artist Gina “Conviction” Iniong of the Philippines is raring to enter the ONE Championship cage once more with an attempt to put herself back on the winning track. This is barely five months since she was last seen in action.
Iniong’s most recent outing did not go her way as she suffered a unanimous decision loss to Mei “V.V” Yamaguchi of Japan in their rematch at ONE: IMMORTAL PURSUIT last November.
After dealing with Iniong’s signature right hand and takedowns in the first round, Yamaguchi turned the tide in the second stanza by resorting to her superb grappling pedigree.
On the canvas, Yamaguchi continuously pummeled Iniong with thudding strikes and tried to bring the bout to a close with savvy submissions attempts.
Yamaguchi punctuated the marquee match-up by grinding out Iniong in the third frame, steering the former world title contender to a unanimous decision victory.
“It was a tough loss. I was prepared for that bout, but I didn’t perform the way I should against a veteran like Mei Yamaguchi. She did her homework against me,” Iniong recalled.
With the drive to reinsert her name into the winner’s column, Iniong chose not to wallow over her setback to Yamaguchi this past November as she jumps right back into action by squaring off with another ex-world title challenger in Jenny “Lady GoGo” Huang of Chinese Taipei.
“I’ve taken the defeat in a good spirit. It’s back to square one for me, but I am not afraid to start again,” she stated. “It’s not a defeat. I think of it as a beneficial lesson.”
Both outstanding ladies are slated to face each other on the undercard of ONE: HEROES OF HONOR, which takes place at the 20,000-seater SM Mall of Asia Arena in Manila, Philippines on 20 April.
“It’s a privilege to compete with a talented martial artist like Jenny Huang. I am ready to give my countrymen an exciting bout,” said Iniong, who is brimming with pride and excitement as she wants to quickly bounce back from the loss.
Highly-regarded as one of the most skilled female talents in ONE Championship, Huang sports a professional record of five wins and two losses.
Of her five career victories, the 27-year-old Taiwanese owns three wins via impressive submission, including her gogoplata finish of Iniong’s Team Lakay comrade April Osenio in December 2016.
Huang is seeking redemption after losing two of her assignments in 2017, yielding to Angela Lee for the ONE Women’s Atomweight World Championship via third-round knockout in March and then bowing down to Yamaguchi by way of second-round submission two months later.
“I am not underestimating Jenny Huang by any means. To do so would be a terrible mistake, even if I am familiar with her style, I will bring my A-game on the 20th of April,” Iniong guaranteed.
Soft-spoken and generally reserved, Iniong is eager to get her career back on track, but the Team Lakay hard-hitter also knows what she has to do to get the job done.
“It’s time to move on from my defeat last November. The future is bright for me. I have a tough opposition in front of me this coming April 20. If I want to be the next contender for the title, winning impressively against Jenny Huang will be my best option,” she declared.