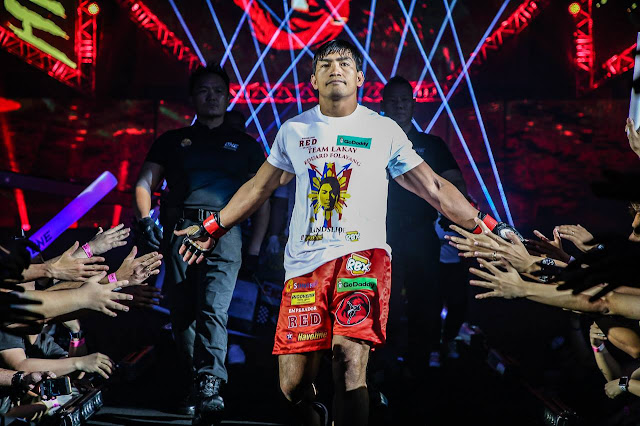 Eduard Folayang
Since joining ONE Championship in 2011, Filipino mixed martial arts legend Eduard “Landslide” Folayang, 34, has competed against two opponents from Russia. On July 27, 2018, the superfighter from Baguio City, Philippines will face his third Russian opponent.
On December 5, 2014, Folayang was knocked out by Timofey Nastyukhin, 28, of Novokuznetsk, Kemerovo Oblast, Russia at “ONE: Warrior’s Way” at the SM Mall of Asia Arena in Pasay City, Metro Manila, Philippines. On May 18, 2018, the Filipino fighter defeated Kharun “Predator” Atlangeriev, 25, of Dagestan, Russia via unanimous decision at “ONE: Unstoppable Dreams” at the Singapore Indoor Stadium in Kallang, Singapore.
“ONE: Unstoppable Dreams” marked Atlangeriev’s ONE Championship debut and first MMA loss. After losing to Folayang, the Russian fighter now has 11 wins and 1 loss.
Coming out of the victory at “ONE: Unstoppable Dreams,” Folayang will return to the SM Mall of Asia Arena. He will compete against Atlangeriev’s fellow Dagestani fighter Aziz Pahrudinov, 29, at “ONE: Reign of Kings.”
A Sambo World Champion, Pahrudinov is making his ONE Championship debut at “ONE: Reign of Kings.” He is entering the cage as an undefeated fighter with 20 wins and 0 loss.
“He is another tough Russian opponent, with the typical Russian style, aggressive and calculated,” Folayang said of Pahrudinov. “He has great wrestling and solid striking,  excellent all-around skills. It’s hard to face these kinds of fighters because you have to be on your toes the entire bout.”
“Get too close, and there’s the threat of the takedown,” Folayang added. “I will be prepared to face this style once again.”
Representing Team Lakay, Folayang is excited to face his third Russian opponent in ONE Championship. He said it is “going to be a good, exciting fight.”
“I will do my best to keep every advantage and win,” the Team Lakay fighter promised. “He doesn’t have many weaknesses, but I would like to test his striking. Let’s see if he can keep up with me on the feet.”
Here is a recap of “ONE: Unstoppable Dreams,” which featured the bout between Folayang and Atlangeriev:
For more updates on ONE Championship, please visit www.onefc.com, follow us on Twitter and Instagram @ONEChampionship, and like us on Facebook at https://www.facebook.com/ONEChampionship.