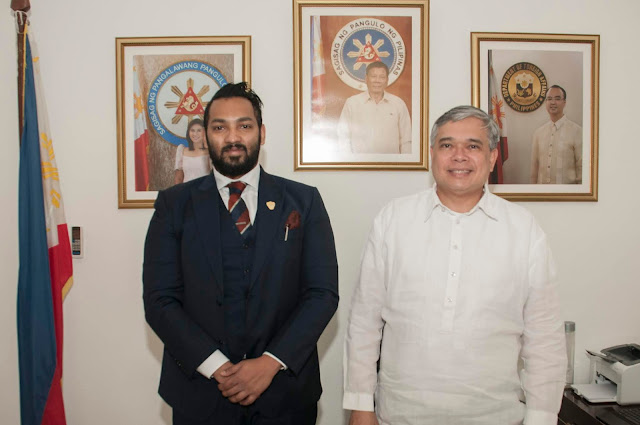 Mohammed Shahid, Alfonso A. Ver
The Philippines is home to several combat sports champions. Among them are World Boxing Association Regular Welterweight Champion Manny “Pac-Man” Pacquiao, 39, and Brave CF Bantamweight Champion Stephen “The Sniper” Loman, 23.
Recently, Brave Combat Federation president Mohammed Shahid held a meeting with His Excellency Alfonso A. Ver, Ambassador of Philippines to the Kingdom of Bahrain. An official announcement is yet to be made but the meeting could mean Loman’s second title defense may be the main event of the first ever Brave CF event in the Philippines.
Representing Team Lakay of Baguio City, Philippines, Loman successfully defended his Brave CF Bantamweight Champion belt on June 9, 2018 in Belfast, Northern Ireland. He now has a professional MMA record of 9 wins and 2 losses and his next title defense may take place in this home country.
On July 14, 2018, Pacquiao earned his first WBA title as he dethroned his Argentine opponent Lucas “La Maquina” Matthysse, 35. The Filipino boxing legend has been fighting professionally since 1995 and now holds a professional boxing record of 60 wins and 7 losses.
Brave CF president Mohammed Shahid recognizes what the success of Filipino fighters like Pacquiao and Loman means to Filipinos. Shahid explained, “The historic title defense by the youngest champion in Brave Combat Federation, Stephen Loman and the return of the legend, Manny Pacquiao ushers the golden age of combat sports in Philippines where you see the continuous pursuit for excellence from the youngsters while the legends never cease to inspire and mesmerize not just Philippines but the whole world.”
The Kingdom of Bahrain hosts a sizable expatriate community from the Philippines. The two countries share strong relations and mutually beneficial ties including initiatives in growing economic relations, fostering greater exchange and cooperation in trade investments, tourism, culture and education.
“Kingdom of Bahrain and the Philippines share a strong bond when it comes to nurturing relations, greater cooperation in trade investments, tourism, as well as culture and education,” Shahid said. “We have found yet another common ground when it comes to the passion that we share for combat sports.”
Brave CF is looking forward to nurturing the sport of mixed martial arts in countries like the Philippines, according to Shahid. He added that the Bahrain-based MMA promotion “will be working towards the goal of creating a global eco-system for the sport and offer more opportunities for fighters, economy and growing relations.”
Hosting Brave CF in the Philippines will ensure the growing interests in sports and media by the Kingdom of Bahrain under His Highness Sheikh Khalid bin Hamad Al Khalifa to have a strong base in the Southeast Asia. The first Brave CF event in the region took place in Jakarta, Indonesia on May 11, 2018 at “Brave 12: KHK Legacy.”
Learn more about the recent developments in Brave CF here: