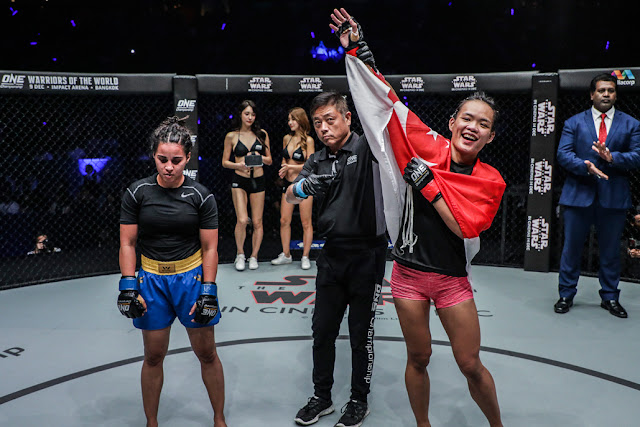 Pooja Tomar, Yuji Shimada, Tiffany Teo
If a teenaged Tiffany “No Chill” Teo could see her adult counterpart, she would be unrecognizable. As a young girl, the Singaporean martial arts standout was heavily involved in choir activities, which she participated in for a decade.
“I was a nerd when I was a kid,” Teo shared in jest. “I was not very active.”
Today, the 28-year-old Singaporean mixed martial artist is the polar opposite as she traded in her songbooks and rehearsal rooms for a pair of four-ounce gloves and the gym. She went from a quiet, unassuming choirgirl to becoming a renowned strawweight martial arts prospect with an impressive record of 7-0.
The winding road to ONE Championship began in the oddest of places, in front of the television screen. Teo’s interest in martial arts, Muay Thai specifically, was stoked by popular reality show “The Contender Asia.”
Motivated by the aforementioned television program and a brief stint in Taekwondo, Teo made her way to a Singapore gym to start training in the art of eight limbs nearly eight years ago. What started out as a way to stay in shape quickly turned into requests for her to test out her skills against real competition.
“I had no plans to compete,” Teo revealed. “My coaches kept asking. They wanted me to go to Thailand. I thought it was a crazy idea. ‘You want me to go face a girl that has been doing it all her life?’”
Teo turned down the opportunity test herself in Thailand. After training for two years, she put Muay Thai on the shelf completely as she packed her bags and headed to the United States to study Psychology at the University of Buffalo, where she graduated with a Bachelor of Arts degree.
However, school was far from enough to keep Teo from wondering “what if” in terms of martial arts competition. As each day passed, the fire in her to compete grew stronger.
With a full life prior to heading to the United States, there was simply no time for Teo to train, but after concluding her studies, the window opened again. She returned to Singapore and dove head-first into the amateur martial arts scene after just a month of training.
What was meant to be a one-time experience that Teo could cross off her bucket list soon turned into something more serious, all because she lost. She pointed out, “I hate losing. I decided to re-evaluate what I did wrong, and I wanted to continue.”
A far cry from her days in the choir, Teo’s journey to perfect her craft in martial arts progressed quickly. After immersing herself with Muay Thai and boxing, she dabbled in the famous grappling discipline of Brazilian Jiu-Jitsu.
Before she knew it, the Singaporean was on the road to a full-fledged professional mixed martial arts career. She explained, “I fell in love with martial arts. There is more to it than throwing strikes and grappling with your training partner on the mat. It empowers me every single day.”
From the amateur to the professional ranks, there was one battle that Teo fought for every single match that she was booked for, which was winning the approval of her parents. She revealed that they did not like the fact that she was competing.
“Since day one, they asked me why I wanted to do it, (telling me) ‘You cannot be a normal person with a nine-to-five job?’” Teo said of her parents. “They have let it go, but I know they do not like it. They wanted me to settle down and live a normal life.”
After having her hand raised in seven professional bouts inside the cage, Teo has received the biggest opportunity of her perfect martial arts career. She is scheduled to clash with “The Panda” Xiong Jing Nan for the inaugural ONE Women’s Strawweight World Championship.
Both women are set to collide in the main event of “ONE: Kings of Courage,” which takes place at the Jakarta Convention Center in Indonesia on January 20, 2018. Teo can make history on that fateful night, but she knows that it will not be easy.
“It takes a lot of discipline and hard work to be a world champion,” Teo stated. “We see how people change after they become the champion, so I feel like you need to stay humble, grounded, and continue to work hard.”
Although Xiong is widely-regarded as one of China’s finest woman warriors, Teo is confident in her ability to win as she is preparing for all possible scenarios for her first-ever martial arts world title contest. The latter said, “I feel a knockout or submission is possible.”
“She is pretty wild with her punches so the opening for a knockout is there,” Teo said of Xiong. “And an opening for a takedown is there if she is committing to her punches.”
At the same time, Xiong is tough, Teo continued. The Singaporean said her Chinese opponent “might not get knocked down or knocked out, and she might go the full five rounds, so there are a lot of possibilities and outcomes to this match.”
Having earned her parents’ approval, Teo is 100 percent focused on becoming the first ever ONE Women’s Strawweight World Champion and the second ONE World Champion to fly the Singapore flag. She said her parents are very supportive now.
When Teo first started competing in martial arts, people were not supportive and wanted her to stop. But now, they are checking on her and her training and preparations and are even asking about her matches.
With her family and friends behind her, Teo envisions victory at “ONE: Kings of Courage” against her Chinese opponent. The former said her family and friends are changing their attitude about her career as an MMA fighter.
“It is really nice having the support of my parents,” Teo concluded. “I am really happy about it. Now, I am so motivated to win and bring home the belt.”
- Advertisement (300x250) -