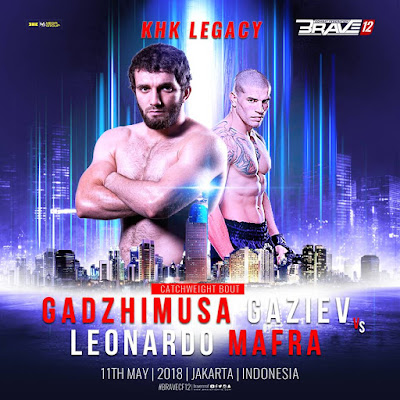 Gadzhimusa Gaziev, Leonardo Mafra
PRESS RELEASE
Fighting out of Dagestan, Russia, Gadzhimusa “Deadshot” Gaziev, 25, has signed to fight his fourth bout in Bahrain-based mixed martial arts promotion Brave Combat Federation. He will face the former UFC fighter Leonardo “Macarrao” Mafra, 28, of Santa Catarina, Brazil at “Brave 12: KHK Legacy.”
Gaziev moved to the middleweight division of Brave CF after three bouts in the welterweight division of the promotion. He debuted in the first event of the promotion as a replacement for Mohammad Fakhreddine to face Thiago Vieira.
In the bout, Gaziev shocked the fans by handing over the first defeat in the career of Vieira. The former won the fight by knock out also putting an end to the eight fight win streak of the latter.
However, the next two fights of Gaziev ended up with disappointing losses against Carl Booth and Erik Carlsson. The Dagestani fighter had been looking to bounce back with a victory in the promotion.
“Brave 12: KHK Legacy” marks the first fight of Mafra with Brave Combat Federation. Both the former UFC fighter and Gaziev will be competing for the first time in Indonesia.
Mafra made his UFC debut on June 23, 2012 at “UFC 147” where he lost to Thiago de Oliveira Perpetuo. On July 16, 2014, Mafra returned to the UFC and lost to Rick Story at “UFC Fight Night 45.”
On March 21, 2015, Mafra had his first UFC win at “UFC Fight Night 62” by defeating Cain Carrizosa via unanimous decision. Mafra’s last UFC bout took place on July 18, 2015 at “UFC Fight Night 72” where he lost to Steven Ray.
Currently,  Mafra has 14 wins and 4 losses. On the other hand, Gaziev has 7 wins and 3 losses.
The fight night of “Brave 12: KHK Legacy” will take place at Balai Sarbini in Jakarta, Indonesia on May 11, 2018. Also in the fight card are Benjamin Bennett, Hussain Ayyad, Jomar Pa-ac, Pawel Kielek, Mehdi Baghdad, Eldar Eldarov and Brian Hooi.
Here is a trailer for “Brave 12: KHK Legacy” featuring the bout between Kielek and Baghdad: