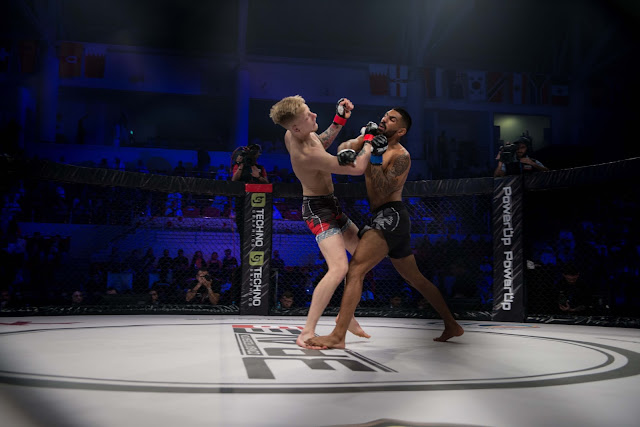 Sam Patterson, Hardeep Rai
PRESS RELEASE
Brave Combat Federation has announced that Hardeep Rai of England will be competing in Jakarta, Indonesia in the 12th event of the Bahrain-based mixed martial arts promotion titled “Brave 12: KHK Legacy.” He will face John Brewin of New Zealand in the lightweight division.
Rai and Brewin had respective promising amateur careers. Both athletes showcased dominant performances at the International Mixed Martial Arts Federation (IMMAF) amateur events.
With a three-fight contract with Brave CF, Rai trained in KHK MMA Gym Bahrain for his previous fight with the promotion. He was also the only fighter from the United Kingdom to win bronze in the 2015 IMMAF European Open Championships and in the 2016 IMMAF World Championship.
In Rai’s professional debut, he defeated Arnan Chaiyasan in the first round by way of submission at “Brave 5” in Mumbai, India. This was followed by a TKO victory at “Brave 9: The Kingdom of Champions” in Bahrain against Sam Patterson from Crossface MMA in the U.K.
At “Brave 12: KHK Legacy,” Rai will be the sole representative from the U.K. on the fight card. The event marks his third appearance in Brave CF.
The “Brave 12: KHK Legacy” fight night will take place at Balai Sarbini Hall in Jakarta, Indonesia on May 11, 2018. Meanwhile, watch  the bout between Rai and Patterson at “Brave 9: The Kingdom of Champions” here: