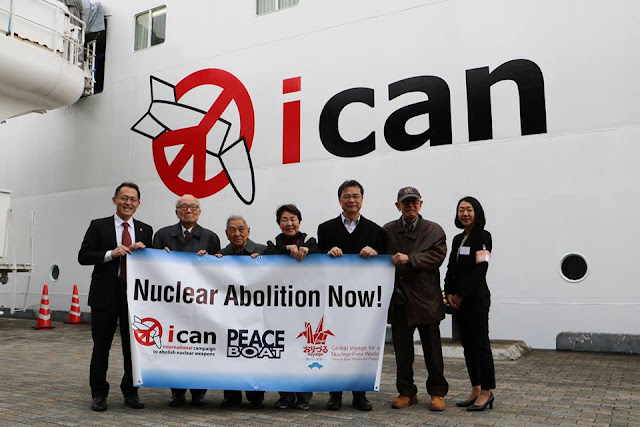 Peace Boat (Facebook/Peace Boat)
The ship chartered by the Japan-based nongovernmental organization (NGO) Peace Boat has started its 96th voyage. In almost three months, it will visit eight Asian and Oceanian countries, namely Australia, Indonesia, New Caledonia, New Zealand, Papua New Guinea, the Philippines, the Solomon Islands and Taiwan.
Peace Boat works closely with the called International Campaign to Abolish Nuclear Weapons (ICAN), a global civil society coalition of around 470 NGOs from more than 100 countries. Launched in 2007, the ICAN received the Nobel Peace Prize in 2017.
To start its 96th voyage, the ship left Yokohama, Japan on January 8, 2018 and landed on Kobe, Japan on January 9, 20018. It will arrive at Keelung, Taiwan in January 12, 2018 and at Cebu, Philippines on January 15, 2018.
It will be the first time for the Peace Boat ship to visit Indonesia. It will stay in Bali January 19-20, 2018 and in Fremantle, Australia January 24-25, 2018.
In the last week of January 2018 and the first week of February 2018, the ship will remain in Australia. It will visit Adelaide on January 29, 2018, Melbourne on January 31, 2018, Hobart on February 2, 208 and Sydney February 5-6, 2018.
Leaving Australia, the ship will go to Christchurch, New Zealand on February 12, 2018, Auckland, New Zealand on February 15, 2018,  Noumea, New Caledonia on February 19, 2018, Honiara, Solomon Islands on February 22, 2018 and on Rabaul, Papua New Guinea on February 24, 2018. It will return to Yokohama on March 4, 2018 and to Kobe on March 5, 2018.
Among the people on board the Peace Boat ship is the Japan Confederation of A- and H-Bomb Sufferers Organizations (Nihon Hidankyo) co-chair Terumi Tanaka. This is his first time to join the tour.
“Grass-roots lobbying is an important activity,” Tanaka told the Japan Times. “I am looking forward to meeting people from various towns in the countries we will visit.”
ICAN’s international steering committee member Akira Kawasaki told the publication that it is necessary to work toward realizing the goal of putting the Treaty on the Prohibition of Nuclear Weapons into effect. Passed by 122 United Nations (UN) members on July 7, 2017, the treaty has yet to be carried out.
Only the Netherlands voted against the treaty while Singapore abstained. On the other hand, 69 countries did not vote.