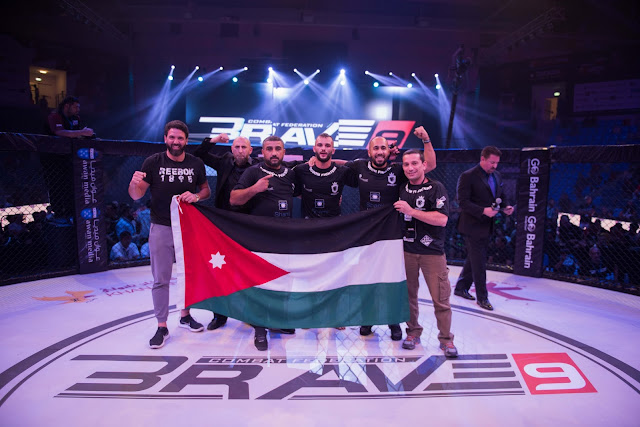 Jarrah Al Selawe (4th from the left) and team
PRESS RELEASE
Representing The Kingdom Fighters from Jordan, Jarrah “The Jordanian Lion” Al-Selawe recently cleared rumors and confirmed that he has signed the contract to face Tahar Hadbi in Jakarta, Indonesia at “Brave 12” on May 11, 2018. Bahrain-based mixed martial arts promotion Brave Combat Federation had announced that it would host its first event in Jakarta, Indonesia.
While Al-Selawe did not give further details regarding the fight, he did not the possibility of an interim championship of the promotion to be introduced in Indonesia. Previously, he faced Hadbi’s ObyFight teammate David Bear at “Brave 10: The Kingdom Rises,” which was hosted in Amman, Jordan.
Initially, Carlston Harris was scheduled to defend the welterweight championship against Al-Selawe in Amman, Jordan. Harris was forced to withdraw from the bout due to an injury which brought in Bear as a replacement.
The bout was noted for the all-round action showcasing solid striking game from both fighters alongside their impressive ground game. It ended with four seconds to spare when Bear was submitted in a triangle choke by Al-Selawe with Hadbi at the corner of his ObyFight teammate witnessing the Kingdom Fighters member securing a win.
Al-Selawe has the most number of wins in the welterweight division of Brave CF with 4 wins. Before Bear, Al Selawe defeated Erik Carlsson, Daniele Scatizzi and Carl Booth.
Currently, Al-Selawe is undefeated for six fights in a row and has been a vital presence at the welterweight division of the promotion representing The Kingdom Fighters. Watch the bout between him and Bear at “Brave 10: The Kingdom Rises” here: