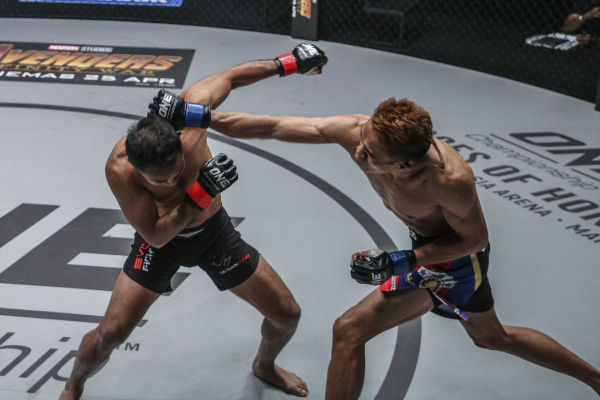 Dejdamrong Sor Amnuaysirichoke, Jeremy Miado
It has not been an easy run for Filipino dynamo Jeremy “The Jaguar” Miado as he received a lukewarm reception when he joined ONE Championship in 2017.
After losing his first two matches in ONE Championship, Miado was given a chance to turn his luck around three months ago, sharing the promotion’s famed circular cage with a celebrated Muay Thai legend.
Miado took full advantage of the opportunity before him, and in the co-main event of ONE: IRON WILL in Bangkok, Thailand this past March, he managed to surprise everyone in attendance at the Impact Arena by knocking out former ONE Strawweight World Champion Dejdamrong Sor Amnuaysirichoke in front of his hometown crowd.

The 25-year-old Marikina City resident connected with a perfectly-timed right hook, which sent Amnuaysirichoke crashing to the canvas.

The referee quickly rushed forward to stop the contest before Miado was able to land any follow-up shots, with the end coming at 1:29 of the opening round.
Miado became the first person to finish Amnuaysirichoke in mixed martial arts competition and now owns the second-quickest knockout in ONE Championship’s strawweight history.
Although Miado expected to walk out victorious at ONE: IRON WILL, he did not anticipate knocking out a Thai kickboxing icon like Amnuaysirichoke.
“The game plan was to counter his aggressiveness and throw out combinations,” he shared. “The plan was to defeat Dejdamrong, but the knockout was unexpected. I felt really shocked because I defeated my idol.”
The impressive conquest of Amnuaysirichoke was a much-needed win for Miado, who has experienced a rough start to his tenure in the organization.
“All the hard work in the gym has finally paid off. I am really grateful,” he said. “I felt really strong and at my peak on that night. I showed everybody the real me, which I was not able to do so in my last two bouts.”
“Against my idol Dejdamrong Sor Amnuaysirichoke, I made sure that my performance would speak about the effort that I’ve done in training,” Miado added.
Miado will attempt to build on the amazing feat of defeating Amnuaysirichoke last March when he meets 13-time Thai national wrestling champion Kritsada “Dream Man” Kongsrichai on June 29.
Both man are slated to square off against each other on the undercard of ONE: SPIRIT OF A WARRIOR, which takes place at the iconic Thuwunna Indoor Stadium in Yangon, Myanmar.
“Here we are again. Another tough challenge is on our way. To be able to compete against a highly-decorated wrestler like my next opponent, it will only be good for my experience as a martial artist,” Miado stated.
Kongsrichai won two of his last three outings in ONE Championship, scoring first-round stoppage triumphs over the likes of Adrian Mattheis and Rabin Catalan.
The 26-year-old Thai grappler aims to place himself back on the winning track after his first-round stoppage of Robin Catalan in March was reversed to a disqualification loss.
Kongsrichai initially earned a first-round technical knockout victory over Robin Catalan as he suplexed his opponent and finished him off with punches at the 1:40 mark.
However, company head honcho Chatri Sityodtong issued a statement via Facebook hours later that the move was illegal, and as a result, Robin Catalan was awarded with the win via disqualification.
“I can really feel that my opponent wants to win in our fight because of what happened. It’s disappointing on his part because he was already declared as the winner. That kind of mindset makes him more dangerous. He is hungry to win. But I am ready for him,” Miado opined.
Miado views this upcoming strawweight tilt with Kongsrichai as the perfect platform to see where his talent truly stands.
“I consider myself a striker first and foremost, but I can take the bout to the ground. I am capable of competing anywhere, whether it is on the feet or on the mat. I have been working a lot on my wrestling and my Jiu-Jitsu, so I am confident I can handle any situation that happens in the cage,” he explained.
According to Miado, the way he sees things is that if he continues to win, it will inevitably lead to his dream of becoming the ONE Strawweight World Champion.
“I want people to know that I am a simple guy with a big dream. And I have the goal of becoming a world champion in my division. One win at a time,” he ended.
​For more updates on ONE Championship, please visit www.onefc.com, follow us on Twitter and Instagram @ONEChampionship, and like us on Facebook at https://www.facebook.com/ONEChampionship.​