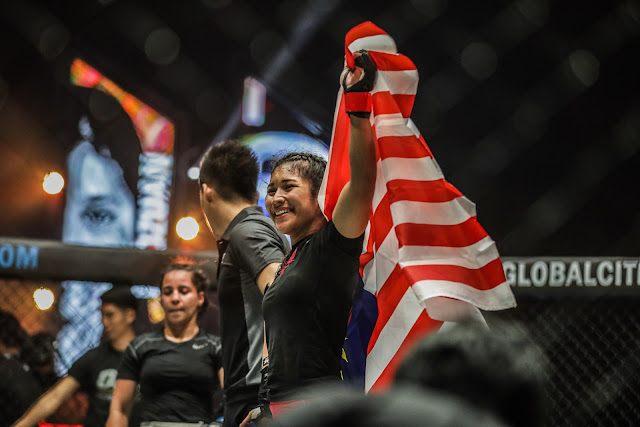 Jihin Radzuan
Months after a successful ONE Championship debut at Axiata Arena in Kuala Lumpur, Malaysia, Jihin “Shadowcat” Radzuan, 19, is returning to the same venue on July 13, 2018 for her second bout in the promotion. She will square off with Priscilla “Thathi” Hertati Lumban Gaol, 30, of Jakarta, Indonesia at “ONE: Pursuit of Power.”
Fighting out of Johor Bahru, Malaysia, Radzuan is facing a more experienced competitor at “ONE: Pursuit of Power.” However, the Johor Bahru resident is confident that she will walk away with her hand raised in triumph.
“I know she is a good fighter with a good background in martial arts,” Radzuan said of Gaol. “Plus, she is more experienced than me. But one important key to success is self-confidence. The trait has always been with me in this journey. I look at things optimistically.”
Gaol is the only Indonesian contender at “ONE: Pursuit of Power” while Radzuan has two fellow Malaysian fighters, namely Agilan “Alligator” Thani, 22, and Keanu Subba, 24. The main event is a welterweight bout between Thani and Zebaztian “The Bandit” Kadestam, 27, of Sweden.
While Gaol holds a professional MMA record of 3 wins and 2 losses, Radzuan currently has 2 wins and 0 loss. For the undefeated contender, their upcoming bout will be “just another day in the office.”
“I’m super excited,” Radzuan said. “I am definitely taking home the win in front of my hometown crowd.”
Aside from being one of the youngest athletes representing Malaysia in ONE Championship, Radzuan is also one of the few female Malaysian MMA fighters competing professionally. She is happy that more and more women like her are getting into the sport.
“Now, I see women who are interested in martial arts for self-defense purposes,” Radzuan said. “It’s a great start.”
Meanwhile, here is one of Gaol’s previous bouts:
For more updates on ONE Championship, please visit www.onefc.com, follow us on Twitter and Instagram @ONEChampionship, and like us on Facebook at https://www.facebook.com/ONEChampionship. ​