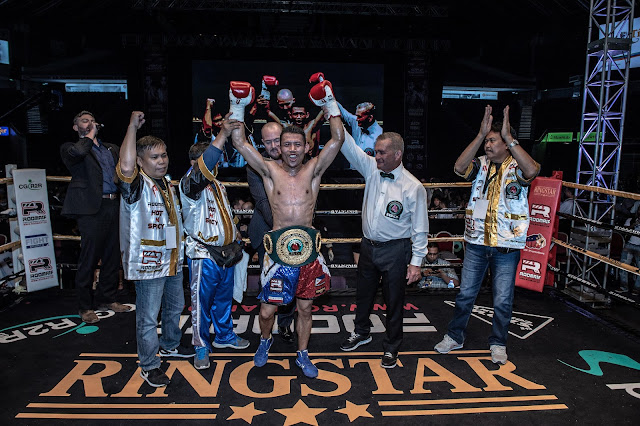 22 APRIL 2018 – SINGAPORE: Ringstar Boxing, Asia’s fastest growing sports media property, which has now reached an overwhelming broadcast footprint of over a potential billion viewers across the globe, just had its very successful ‘Roar of Singapore IV – The Night of Champions’, held last weekend at the 10,000-seater Singapore Indoor Stadium.
The fight was also aired live in different parts of the world, via Fight Sports and Fox Sports Asia.
Filipino boxer Michael “Gloves on Fire” Dasmarinas, won the IBO Bantamweight world title, after stunning Frenchman Karim Guerfi with a knock out, 40 seconds into the 4th round of what was supposed to be a 12-round bout.
The 25-year old Camarines Sur native, had a month-long training in Japan to prepare him for the world title fight.
According to boxing analyst Mike Ochosa, “They say that a big puncher will always have an advantage in a boxing match, and in every round, that’s what Mike approved. Karim did the right thing and engaged Mike from the beginning.  The Frenchman showed that his hands were ready to be thrown. He was throwing a lot of punches and trying to outbox and smother Dasmarinas.  But that also is a very big risk for Karim.  And in the fourth round he found out just how dangerous his plan was.  He kept on engaging the Filipino and put himself at risk.  Mike on the other hand, at the start of round two, started to focus on body shots which forced the Frenchman to bring down his defense.  And at the most opportune time in the fourth round Mike unleashed a straight left which dropped the Frenchman.”
Dasmarinas says, “Talagang thankful ako sa mga taong tumulong sa akin, lalo na ang Ringstar at si Scott Farrell, na nagtiwala sa kakayahan ko, kahit sinabing underdog ako.  Pero mas gusto ko yun na underdog ako para di ako ma-pressure masyado.  Yun pagkapanalo ko na knock out, di ko ine-expect na tatamaan siya na ganoon.  In-expect ko mananalo ako ng knock-out pero di ko inakala na ganon kaaga.”
(I am thankful to everyone who has helped me, specially Ringstar and Scott Farrell, who trusted in my capabilities, even though I’ve been called an underdog.  But I prefer being called an underdog, so I wouldn’t feel that pressured.  With regard the knock out, I didn’t expect that I hit him that hard.  I expected that I will win by knock out, but didn’t think that I will knock him out that early.)
Ringstar Founder and CEO Scott Farrell says, “Ringstar, now has its first world champion with Michael Dasmarinas.  We will now build on this victory with more exciting fights and you will see him with more world title belts, being added to his collection very soon.”

Singaporean boxer Muhamad “The Chosen Wan” Ridhwan, on the other hand, stayed undefeated, now 10-0, and took home the IBO Intercontinental Featherweight Title that night.  He faced Filipino boxer Jeson Umbal, in a 12-round bout, which the audience saw as a close fight.  The scorecard went in favour of Ridhwan, which saw these numbers, 112-116, 114-115, and 111-117.
Boxing analyst Mike Ochosa says, “It was very clear that the Filipino was going to go for the knockout particularly at the beginning of the fight.  Ridhwan had to take all the power punches thrown by the Filipino in the beginning.  At the same time the Singaporean kept on boxing and moving, and jabbing Jeson.  Jeson from the beginning of the fight to the end was only banking on one thing, his power.  He was connecting with left treats and right hooks but unfortunately was not able to follow up any opportunity that he created for himself.  On the other hand, Ridhwan continued his strategy of mixing it up with Jeson, with jab hooks.  The fight was simply about a boxer with a plan he implemented well, versus a boxer who just wanted to engage in and the fight with one power shot.”
Ringstar Founder and CEO Scott Farrell says, “Ridhwan has proven to the world that he is legitimate and a true world title contender.  He is everything, I have been telling you he is, and now the doubters are silenced…. A World title fight is next!”
Sponsors and partners of “Roar of Singapore IV: The Night of Champions” include Roomaif International, Marina Bay Sands, and Alexandre Christie.
Ringstar has a global live broadcast footprint of 1 billion viewers, plus broadcast partners that include FIGHT SPORTS Channel and Fox Sports Asia.  Please visit www.fightsports.tv and www.foxsportsasia.com for more information.Get the latest announcements at www.ringstar-boxing.com and follow us at www.facebook.com/ringstarboxing and on Twitter and Instagram at @ringstarboxing.