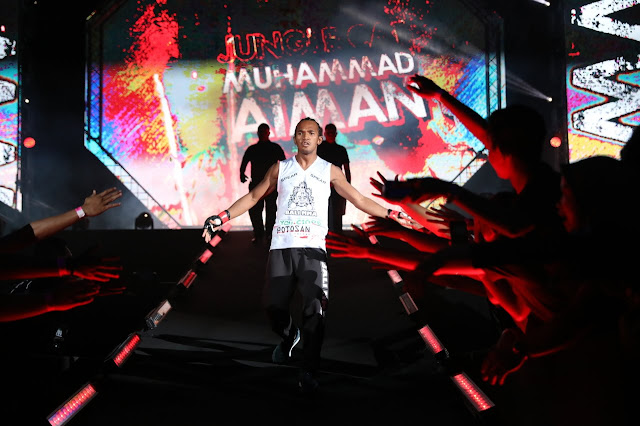 Muhammad Aiman
Muhammad “Jungle Cat” Aiman will be heading into hostile territory in his next trip to the ONE Championship ring.
The 23-year-old Malaysian martial artist is slated to face China’s own “Rock Man” Chen Lei in a three-round bantamweight contest at ONE: BEYOND THE HORIZON on Saturday, 8 September at the Baoshan Arena in Shanghai, China.
While he will be having an arena full of fans cheering against him, Aiman is looking to keep his winning momentum going, as the Negeri Sembilan native is nothing short of excited at the opportunity of challenging an undefeated prospect such as Chen.
Aiman is currently coming off back-to-back unanimous decision wins over Yang Fei and Rin Saroth.
“I was really excited, because he is tough, and he has a good name,” Aiman said of Chen in an interview with ONE Championship’s official website (ONEFC.com). “He is undefeated, and I always thought I would fight him one day.”
The 29-year old Chen is riding high on an impressive winning streak of his own, unbeaten in his first eight professional bouts with four of those wins under the ONE Championship banner and all ending in spectacular finishes.
Aiman, a former MIMMA featherweight champion, knows that when he enters the ring on event night, he is going to be in for an action-packed contest against the well-rounded Chinese hero.
“It is going to be tough, but it is going to be a war. I am going to keep going, and he is going to keep going, so I am really excited to fight him,” Aiman stated.
Going up against a former Shanghai Open BJJ Champion, Aiman knows that one of his opponent’s main strengths will be on the ground, but he sees some parts of Chen’s game that can be taken advantage of.
“I feel like he is really strong, and he is good on the ground. He is strong once he gets you down, and he uses his strength to put you down, but I feel like there are still a couple of holes that I can expose. He kind of gassed out in one fight, so I will try to break him down,” Aiman explained.
“I can beat him with my striking, and expose that his conditioning is bad. I feel like I can make him tired, but not make myself tired,” he shared. “That is how I want to beat him.”
In ONE Championship’s stacked 65.8-kilogram weight class, Aiman still has work to do in order to be part of the title contender conversation.
If the Bali MMA-trained Aiman can snatch his third consecutive win and do it against an unbeaten prospect like Chen, then it is certainly a step in the right direction.
“I want to go in there and prove to myself that I can beat a top guy in my weight class,” he stated. “It is very important to me, and I am really excited.”
For more updates on ONE Championship, please visit www.onefc.com, follow us on Twitter and Instagram @ONEChampionship, and like us on Facebook at https://www.facebook.com/ONEChampionship.