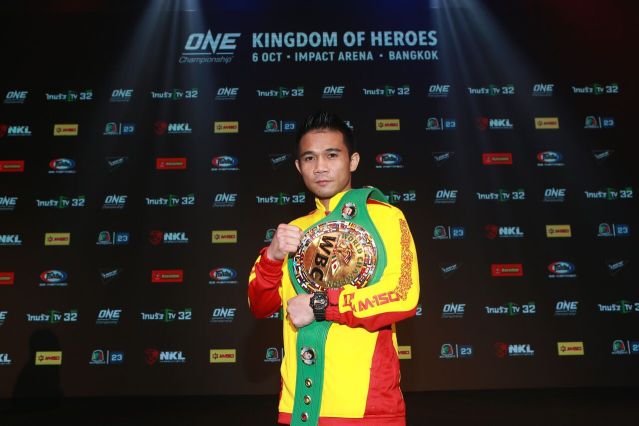 Srisaket Sor Rungvisai
From Muay Thai, Srisaket Sor Rungvisai transitioned to boxing and it was not a happy story initially. He was knocked out in his first two bouts in 2009.
“I needed the money very badly, so I accepted the fight even though I didn’t have much time to prepare and didn’t really know how to box,” Rungvisai recalled. “I just knew that boxing has similarities to Muay Thai.”
“I discussed my future with my girlfriend at that time, and we decided there were only two paths to choose,” the Thai boxer continued. “One is to become a boxer and the other one is to keep on working as a trash collector, and I chose the path to become a boxer because there’s more hope at least. There’s some hope in this career.”
Rungvisai did not post a win until his fourth professional match in November 2009 when he scored a third-round knockout over compatriot Prakaipech Aunsawan. After suffering another loss to Japanese Kenji Oba in February 2010, Rungvisai reeled off 26-straight victories, including an eighth-round stoppage of Yota Sato to clinch the World Boxing Council Super Flyweight title in May 2013.
In May 2014, Rungvisai’s impressive winning streak was halted by Mexico’s Carlos Cuadras. Afterwards, the Thai boxer established another series of triumphs, winning 19 in-ring contests with 16 coming by way of knockout.
During that remarkable stretch, Rungvisai recaptured the WBC super flyweight belt by pulling off an upset win against Roman “Chocolatito” Gonzalez of Nicaragua via majority decision in March 2017.
Rungvisai’s astonishing conquest of Gonzalez earned him a spot in The Ring Magazine’s international pound-for-pound rankings, where he currently occupies the number seven seat. The Thai boxing champ shared, “I never thought that I would come this far or even get to be a world champion.”
“I only aspired to win a regional title and maybe get on television,” Rungvisai continued. “I wound up doing so much more.”
On October 6, 2018, Rungvisai will make his debut in martial arts promotion ONE Championship. He will defend his title at “ONE: Kingdom of Heroes” at the Impact Arena in Bangkok, Thailand against a yet-to-be-announced opponent.
For more updates on ONE Championship, please visit www.onefc.com, follow us on Twitter and Instagram @ONEChampionship, and like us on Facebook at https://www.facebook.com/ONEChampionship.